And it bring back a lot of memories whenever I eat  porridge. Back then, porridge is one of the few things I hated, same goes for bitter gourd, durians, canned black beans fish and etc. I couldn’t remember how it all gradually became my favourite food as I grow older. Having porridge for lunch was like a regular affair, especially for my dad. Even though Cantonese, I think my dad grew up around the strong Teochew community in Kedah and Penang making Teowchew porridge a regular lunch for us. But be it Teochew or Cantonese porridge, I just simple don’t like it. Whenever mum cooks them, I thought someone at home is sick. And when she does cook it for lunch, I would cycle out from the house and head over the nearby Thai food stall for lunch. Of course I would get a good scolding when I got home later.

So, somehow somewhere between the times that I am ready to leave home for tertiary education, I mysteriously discovered a new appreciation for porridge (and also the rest of the food that I hated earlier).

It is comforting and it feels like home. Really.

And one reason that I like to cook them is, they are really easy. For Teochew porridge; just boil it with water and prepare some side dishes and for Cantonese porridge; just chuck everything in timely and let it cook. 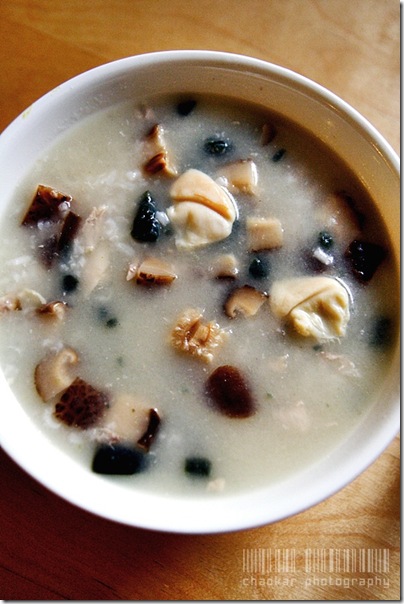 Using Asian agak agak techniques, boil some rice (washed) with a knob of ginger and some dried oyster. While waiting for it to simmer, soak some mushrooms and prepare the chicken. I use chicken thigh particularly. And once it come to boil, add in the chicken. Once the chicken is cook, debone it and shred the meat. The remaining of the bones can go into the porridge. Then wait for the porridge consistency to thicken up.  In between that, give it a good stir to avoid if from going lumpy and burnt. After a reasonable amount of time, add in the shredded chickens, coarsely chopped  century egg and diced mushroom. And of course the pacific clams, and the brine is optional. A dash of sesame oil and salt to taste.

Bring to boil and it’s ready to be served with a dash of pepper and a whip of soy sauce. 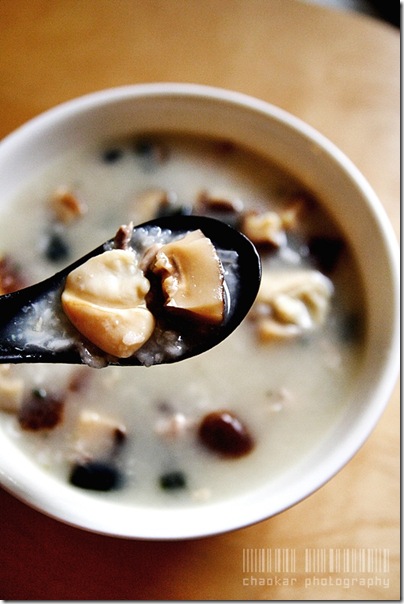